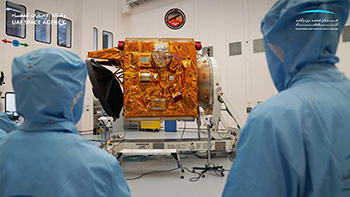 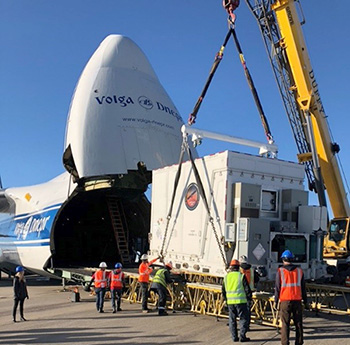 On July 19, 2020, the United Arab Emirates’ first interplanetary mission successfully took off from the southern tip of Japan, launching a car-sized probe bound for Mars. The launch marked the beginning of the country’s most ambitious space project yet, aimed at studying the weather on Mars as it evolves throughout the planet’s year.

The spacecraft, named Hope, took off on top of a Japanese H-IIA rocket from Japan’s Tanegashima Space Center. The probe spent seven months traveling through deep space, periodically correcting its course with a series of engine burns. Finally, on February 9, 2021, Hope reached its destination and put itself into an elongated orbit around Mars.

Aeronet Denver‘s role in the project began in early 2018, as we were asked to consult with the University of Colorado regarding packing, documentation, hazardous materials requirements, air and sea transportation of the spacecraft, and ground support equipment. Hope was built at the university’s Boulder campus, and was shipped to Dubai by an Antonov 124 aircraft for further testing and photo opportunities. After spending two months in Dubai, the probe was flown, on the same aircraft, to Nagoya, Japan, where it would then be sent to the launch site via ferry.

The transfer operation required use of the Antonov 124’s onboard crane to carry the spacecraft in a specialized temperature and atmosphere-controlled container. From there, the spacecraft was loaded onto a sea freighter, carried to Tanegashima’s Shimama Seaport, and transferred to the launch site.

Aeronet was also responsible for the post-launch return of all ground support equipment back to its origin at the University of Colorado.

One of the toughest challenges for Aeronet was working with the Federal Aviation Administration (FAA) and the U.S. Department of Transportation‘s Office of Hazardous Materials and Special Permits (in Washington, D.C.) to obtain a special permit authorizing the purge of compressed air while in flight. This was viewed as a major win for the program, as it took over one year to be awarded the special permit.

Aeronet Worldwide is proud to have done its part in helping the United Arab Emirates with this historic mission.

Tell us about your freight needs. We would like to propose a solution!

Since 1982, Aeronet has been a family-owned company dedicated to providing the very best in global logistics solutions and freight services. With associates and partners connected to every major airport and seaport throughout the world, Aeronet is fully capable to handle your cargo and Make It Happen One Shipment at a Time®.

This website viewed best in any browser other than Internet Explorer.